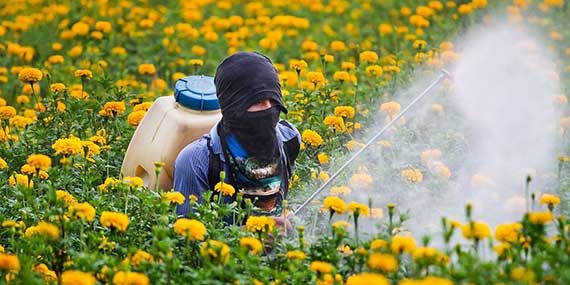 Cell damaging effects of glyphosate – Are we ready for Roundup?

Glyphosate is the active ingredient of many widely used, broad-spectrum herbicides and is commonly applied as a broadleaf weedicide in commercial agriculture. Created by Monsanto in 1970 and marketed from 1974 as “Roundup”, glyphosate has been used extensively across the world ever since1. Although the USA remains its biggest consumer, the use of glyphosate has also increased in other countries. As such, from 1999 to 2010 glyphosate use in Germany increased by 100%, now being sprayed on nearly 40% of German farmland each year2. Due to such extensive use, the genetically modiﬁed crop plants called “Roundup Ready” were created, which are resistant to glyphosate. This further increases the use of this herbicide. The majority of soybean, cotton and corn crops grown in the USA today are of this Roundup Ready variety, which is heavily exposed to glyphosate3.

Glyphosate prevents plants from making aromatic amino acids and other organic compounds necessary for life. Since these processes do not occur in animals, glyphosate was considered relatively harmless for large scale use4. Epidemiological studies also found no causal link between glyphosate and cancer5. However, contradictory evidence began to appear soon after as more cases of long-term glyphosate exposure to humans became available. Glyphosate was implicated in Non-Hodgkin’s Lymphoma in cases of occupational exposure6. Experiments also showed that glyphosate and its co-formulations used in Roundup and other herbicides are harmful at doses below the toxic level7. Therefore, we conducted our own study to evaluate the eﬀects of glyphosate at various doses on cell viability and ﬁnd out if there are sources of possible protection from the harm caused by this widely used herbicide.

Nutritional    supplements    tested    were    composed of vitamins, minerals and plant components and manufactured by diﬀerent suppliers. Their overall composition is characterized in Table 1.

Other reagents as described in Methods.

Reagent preparation and Assays. All nutritional supplements were treated identically in accordance with the protocol recommended by the Unites States Pharmacopeia8. Three recommended daily doses of each supplement were powdered (tablets were crushed using ceramic pestle and mortar, capsules were cut open and powder poured out), placed into a glass container with 900 ml of 0.1N hydrochloric acid and incubated for 1 hour at 37°C in a shaking incubator set with rotation speed of 75 rpm.

Resulting solutions were ﬁlter-sterilized using 0.2 micrometer pore size ﬁlters, aliquoted and kept frozen at -20°C until analyses. Amounts of samples taken for analysis are expressed as number of millionth parts of recommended daily dose of the respective supplement.

Cell viability assay. The assay was performed using the CellTiter 96® AQueous One Solution Cell Proliferation Assay (MTS) supplied by Promega, Madison, WI, USA. This is a colorimetric assay for assessing cell metabolic activity. NAD(P)H-dependent cellular oxidoreductase enzymes in viable cells reduce the tetrazolium dye MTT 3-(4,5-dimethylthiazol-2-yl)-2,5-diphenyltetrazolium bromide) to formazan. The concentration of formazan produced is measured by optical density at 490 nm and it is directly proportional to the number of live cells in culture.

Protein Biomass Assay- Sulforhodamine B based. After appropriate treatments, dead cells were washed away. Cell proteins were ﬁxed, and stained with Sulforhodamine B dye. The incorporated dye was then liberated from the cells by a Tris base solution and quantiﬁed by optical density at 565 nm. An increase or decrease in the number of cells (total biomass) deﬁnes the amount of dye incorporated by the living cells in the culture as the dead cells are washed away. The optical density therefore determines total protein biomass.

NHDF’s Cells were treated with various supplements for 24 hours, all at 0.5 millionth part daily dose in DMEM supplemented with 5% FBS, except for the “No additions” and “No protection” controls which only received fresh media supplemented with 10% FBS.

After 24 hours all treatments were aspirated away, cells were washed 3 times with PBS and cell viability assay was performed or their pictures taken after staining with Hematoxylin and Eosin.

The toxicity of a generic, easily available glyphosate concentrate solution was tested at a range of concentrations from 0.025 to 0.05% against human dermal ﬁbroblasts (derived from the lower skin layers) and human kidney cells.

Figure 1 shows the eﬀects of diﬀerent concentrations of glyphosate on survival of the kidney cells evaluated by changes in the total protein mass of the cells in the culture. This test allows for estimating how many cells are left alive and can recover after their exposure to glyphosate. The results show that one day exposure to as low as 0.035% Glyphosate brings down cell biomass to a baseline level.

Figure 2 presents the eﬀects of glyphosate applied individually and together with various nutritional supplements on the survival of kidney cells.  The results indicate that among six diﬀerent commercially available nutritional supplements tested in the study (presented as diﬀerent colored lines A-F), only one –Supplement A – shows some protective eﬀect against glyphosate but at its lower than 0.035% concentrations. The Supplement “A” was formulated based on nutrient synergy principle.

Figure 2: Changes in total protein biomass of human kidney cells exposed to Glyphosate in the presence and absence of diﬀerent multinutrient formulas (A through E) for 1 day

In addition, we analyzed the eﬀect of glyphosate on viability of human dermal ﬁbroblasts by applying MTT assay. The MTT reagent is metabolized in live cells into a purple colored Formazan compound whose intensity can be quantiﬁed by optical density. It provides an estimate of the number of cells left alive after treatment. The results show (Figure 3) that about 90% human dermal ﬁbroblast cells are killed after exposure to 0.035% Glyphosate and 100% when exposed to its 0.04% concentrations.

Changes in morphology of normal human dermal ﬁbroblasts after exposure to Glyphosate alone and together with select nutritional supplements are presented in Figure 4. The pictures show dramatic changes in cell appearance in the presence of 0.035% Glyphosate compared to control which conﬁrms their severe damage. As an example, Supplement D, added to cells together with Glyphosate (0.035%), showed a lack of eﬃcacy in protecting healthy cell morphology, however cells incubated in the presence of Supplement A show visible protection against Glyphosate- induced damage.

Figure 4: Photos of normal human ﬁbroblast cells (40x magniﬁcation) exposed to either Glyphosate alone or Glyphosate combined with nutritional supplement A and D, respectively for 1 day

Our study corroborates the ﬁndings of other researchers who have alerted that despite warnings to not become hysterical (9), the concerns of glyphosate must not be overlooked.

Our tests were conducted with human skin ﬁbroblasts to mimic a direct exposure to this herbicide through skin contact and with kidney cells, since Round-up has been indicated with increased risk of kidney damage in workers exposed to it due to its strong metal chelating properties (10).

In selecting the glyphosate dose ranges for the study we considered the recommendations of the manufacturer and regulatory restrictions. As such, for ﬁeld applications it is recommended that the 41% commercial solution is diluted to 0.57% for spot treatments and 0.8% to treat large areas. According to the EPA (Environmental Protection Agency) the livestock feed is allowed to have up to 400 PPM of glyphosate residues which is thousands of times higher than has been shown to cause harm in numerous studies. Our initial experiments (not shown) indicated that the cellular toxicity at these concentrations was so strong that there was no possibility left for the cells to recover if exposed to a potential protective agent. Therefore, we applied markedly diluted glyphosate solutions that allowed for testing cell recovery after their exposure to this toxic agent.

To account for the fact that we were adding this herbicide directly to cultured cells, we used only a day long exposure of glyphosate at nearly 20 times lower concentrations that are recommended for spraying but it still caused the death of both the cell types tested.

The results conﬁrm extreme cellular toxicity of glyphosate and that speciﬁc micronutrients applied in proper combinations and dosages can provide some protective eﬀects against this toxin. All commercially available multinutrient formulations tested in this study did not show any signiﬁcant cell protection against glyphosate, except for Supplement A which showed positive eﬀects in protecting cell morphology. This supplement contained plant extracts (green tea and quercetin) that are potent antioxidants and display pleiotropic metabolic eﬀects in the cell. The study did not test the possible mechanisms of this protective eﬀect.

The fact that glyphosate is used widely and is available cheaply must prompt the scientific community, the general public and regulatory authorities to take proper steps in protecting public and animal health against this extremely toxic agent.

The authors appreciate the assistance of Dr. Svetlana Ivanova in preparing supplement solutions tested in the study and valuable discussions.

Figure 2: Changes in total protein biomass of human kidney cells exposed to Glyphosate in the presence and absence of diﬀerent multinutrient formulas (A through E) for 1 day

Figure 4: Photos of normal human ﬁbroblast cells (40x magniﬁcation) exposed to either Glyphosate alone or Glyphosate combined with nutritional supplement A and D, respectively for 1 day

Category: Research In Cellular and Natural HealthMarch 3, 2017
Go to Top