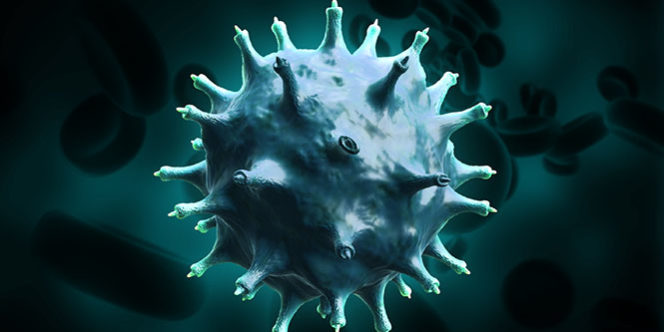 The human immunodeficiency virus (HIV) attacks the body’s immune system by reducing the number of CD4 cells, which are vital to fighting off infection. If left untreated, it leads to severe damage and degeneration of health. Though current HIV treatments – based on the administration of antiretroviral (ARV) drugs – reduce viral load in the bloodstream and extend life, they do not cure HIV infection or restore the affected immune system.

The human immunodeficiency virus (HIV) attacks the body’s immune system by reducing the number of CD4 cells, which are vital to fighting off infection. If left untreated, it leads to severe damage and degeneration of health. Though current HIV treatments – based on the administration of antiretroviral (ARV) drugs – reduce viral load in the bloodstream and extend life, they do not cure HIV infection or restore the affected immune system.

In this report, we describe the case of a 35‑year‑old male HIV patient with clinical symptoms of infection and leucopenia, and the result of treatment with a high dose multiple micronutrient supplement program combined with a prescribed diet. Upon the first consultation in February 2013, the patient presented with severe skin itchiness, pustules with exudations on the back and chest, and sore throat with candidiasis in the mouth. Following an initial symptom exacerbation, the patient experienced complete resolution of all symptoms and a gradual rise of CD4 after adherence to treatment with a high dose multiple micronutrients.

The human immunodeficiency virus (HIV), which belongs to the “retrovirus” group of viruses, attacks the immune system and gradually causes damage and degeneration of health. An infected person is at high risk of developing acquired immune deficiency syndrome (AIDS) with serious infections and cancers. In 2012, there was an estimated 35 million people in the world living with HIV. Of those an estimated 8.7 million people developed tuberculosis, 2 to 4 million have hepatitis B infection, and 4 to 5 million have hepatitis C infection1.

Leucopenia is common in patients with HIV infection, and it correlates with the severity of the disease2. Once infected, HIV mainly targets and destroys the CD4 lymphocyte, also called T-cell or CD4 cell. The patient goes through three stages of disease progression and viral replication: acute infection, clinical latency, and finally AIDS. The CD4 count of an uninfected healthy adult ranges from 500 to 1,200 cells per cubic millimeter. When the number of CD4 cells fall below 200 per cubic millimeter, the disease is considered as progressed to stage 3, i.e., AIDS. It is widely accepted that plasma viral load and CD4 cell counts reflect clinical efficacy and, as such, virological and immunological responses are often used as surrogate endpoints in clinical studies for HIV treatment.

Current HIV treatment is based on the use of antiretroviral (ARV) drugs. ARV drugs may be able to reduce viral load in the bloodstream, but they neither cure HIV infection nor restore the immune system against the infection3,4. During the clinical latency stage, the virus may persist for years in the infected cells, while simultaneously drug-resistant strains also emerge. The hallmark of the disease-associated degeneration is the decline in the CD4 count. The effectiveness of ARV drugs in having any clinical benefits depends upon a number of factors, particularly the CD4 count5 and the nutritional status of patients6, during the commencement of the ARV treatment. However, ARV drugs are highly toxic and are often associated with adverse side effects in the body, such as damage to the liver7, bone marrow8, cellular mitochondria9, and lipodystrophy and dyslipidemia10.

In this report, we describe the case of an HIV patient with clinical symptoms of infection and leucopenia, and the result of treatment with a high dose multiple micronutrient supplement program.

In August 2012, a 35-year-old male was diagnosed with HIV infection at a government hospital. His CD4 count had dropped to a low level of around 350 cells/ul (normal range 500 to 1600 cells/ul). Two months prior to hospitalization he had severe bouts of flu, fever, sore throat, and body aches. Upon discharge from the hospital he opted for non-conventional treatment, with quarterly monitoring of the CD4 count through blood tests. In February 2013, he presented to our integrated healthcare center for the first time with severe skin itchiness, pustules with exudations on the back and chest, and sore throat with candidiasis in the mouth. There were no other symptoms.

Upon the first consultation at our center his CD4 count was 430 cells/ul. Thereafter his health condition was monitored during each monthly visit. His CD4 count fluctuated from 430 in February 2013, to 433 in May 2013, to 362 in September 2013, to 420 in March 2014, to 516 in May 2014, and to 404 in November 2014. During this period the patient was having sore throat, pustules with exudations on the shoulders, back and chest, skin itchiness, body aches, and intermittent fevers. The severity of all the symptoms was reflective of the levels of the CD4 count. Lower levels of CD4 count coincided with more severe symptoms. The fluctuating levels of CD4 count is shown in Figure 1 via the Kaplan-Meier plot chart. From February 2013 to November 2014, the dosage of vitamin C prescribed to the patient was 9,183 mg in 3 divided doses a day. All other micronutrients shown in Figure 1, remained constant from February 2013 until the last visit in November 2015. From early October 2013 to mid November 2014 the vitamin C dosage was increased to 12,183 mg daily. From mid November 2014 on, the vitamin C dosage was further increased to 15,183 mg daily. Following that, all symptoms gradually subsided. By May 2015 the patient was free from all symptoms, and remained so until the last visit in November 2015. CD4 count gradually rose to 505 in May 2015, and 632 in November 2015.

It has been established that once a person is infected with HIV, without conventional treatment the CD4 count will gradually decline, even during the latent phase of the disease. In this case, the CD4 count fluctuated around levels of 400 before maintaining a constant increase to 632 during the last visit in November 2015. The pathological basis of HIV and AIDS is a dysfunctional immune system clinically indicated by leucopenia.

Micronutrients have important roles in cellular physiology and are essential for blood formation, including the white blood cells. A number of studies have shown that specific micronutrients have certain positive effects on HIV at all stages of virus-host interactions. Most of these micronutrients such as vitamins C and E, N-acetyl L-cysteine, glutathione, alpha-lipoic acid, epigallocatechin gallate (EGCG from green tea) and selenium have antioxidant properties capable of blocking HIV replication during the acute, latent and chronic phases of the infection14,15,16. Other studies showed L-cysteine and the tripeptide glutathione inhibit chronic HIV expression17,18, while N-acetyl L-cysteine and selenium inhibit HIV activation in the latent stage of the infected cells16,19,20. Flavonoids including the polyphenol EGCG are found to inhibit HIV at the early stage by blocking interaction of the virus with host cells receptors21,22, and also at the latent and chronic stages of the infected cells23. All of these compounds are in the list of micronutrients mentioned in Table 1.

This case study applied the concept of nutrient synergy to obtain maximum benefit. The concept of nutrient synergy means that the end result is better than the sum of the results using individual nutrients. This concept that produced positive effects with the micronutrient combination, has been demonstrated in previous studies24,25,26. As HIV and AIDS are very chronic conditions that indicate the destruction of the immune system, using a single micronutrient may not be as ideal as using a micronutrient combination to boost the immune system.

In this case study, the adjustment of the vitamin C dosage was in accordance to the patient’s response to treatment. Vitamin C is known to support the white blood cells to kill pathogens. Adjustment of the vitamin C dosage was done twice, in October 2013 and November 2014, when the patient seemed to not improve further. When vitamin C was finally increased to 15,183 mg/day, the patient continued to improve with absence of all symptoms, and CD4 count increased to above 600 cells/ul without any fluctuation. This suggests that a high dose of vitamin C along with multiple micronutrient synergy, may have an effect to suppress HIV replication, which corroborates the previous study of Harakeh and colleagues15.

This clinical study has some limitations. It relies mainly on CD4 count as a surrogate outcome measure for HIV infection. It would be better if the total cell count of viral load were also available. Availability of data on other blood parameters would strengthen the observation.

In conclusion, this case study suggests that a large randomized control study could be beneficial to assess the use of a multiple micronutrient combination as an adjunct to conventional treatment for HIV infection. More studies are needed to investigate the efficacy and safety of the micronutrients.