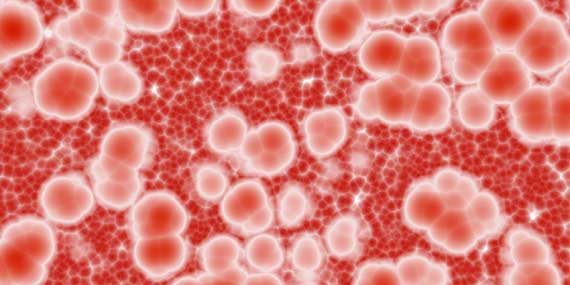 A specific mixture of phytonutrients inhibits cell proliferation, secretion of MMPs and invasion through Matrigel in fibrosarcoma HT-1080 and melanoma A-2058 cells

Fibrosarcoma, an aggressive and highly metastatic cancer of connective tissue that primarily develops in metaphases of long tubular bones, is generally associated with poor prognosis1,2. Cancer mortality usually results from tumor invasion of local tissue and metastasis to vital organs. About 3,300 new cases of bone cancer will be diagnosed and about 1,490 are expected to die from bone cancer in 20161. About 4% of bone cancers are ﬁbrosarcomas1,2. Skin cancer is the most common cancer. Though melanoma accounts for only about 1% of skin cancers, it is an extremely aggressive cancer, causing the most skin cancer- related deaths due to metastasis to other areas of the body, such as lymph nodes, lungs, liver, brain or bone3. About 76,380 new melanomas will be diagnosed and 10,130 people are expected to die of melanoma in 20163. The rates of melanoma have been rising for the last 30 years3. Thus, any successful treatment for ﬁbrosarcoma or melanoma must target metastasis. Degradation of the extracellular matrix (ECM) by matrix metalloproteinases (MMPs) plays a critical role in the formation of tumors and metastasis and has been found to correlate with the aggressiveness of tumor growth and invasiveness of the cancer4-6.

Polyphenols have been reported to provide a wide range of anticarcinogenic properties, such as modulating cell proliferation, tumor growth, angiogenesis, metastasis, inﬂammation and inducing apoptosis. Since polyphenols demonstrate poor bioavailability, combinations of several polyphenols have been proposed to modulate bioavailability of natural compounds and exercise pleiotropic effects. Thus, we investigated the anticarcinogenic effects of a specific mixture of polyphenols, including quercetin, Cruciferex™, curcumin, green tea extract and resveratrol on two different aggressive cancer cell lines in vitro: fibrosarcoma and melanoma.

Cell Culture
Human ﬁbrosarcoma HT-1080 cells and melanoma A-2058 were grown in DMEM, supplemented with 20% fetal bovine serum, penicillin (100 U/ml) and streptomycin (100 mg/ml) in 24 well tissue culture plates (Costar, Cambridge, MA). Cells were incubated with 1 ml of media at 370 C in a tissue culture incubator equilibrated with 95% air and 5% CO2. At near conﬂuence, the cells were treated with PB, dissolved in media and tested at 0, 10, 25, 50, 75, and 100 µg/ml in triplicate at each dose. Phorbol 12-myristate 13-acetate (PMA) 100 ng/ml was added to cells to induce MMP-9 secretion. The plates were then returned to the incubator.

MTT Assay
Cell viability was evaluated by MTT assay, a colorimetric assay based on the ability of viable cells to reduce a soluble yellow tetrazolium salt [3-(4,5-dimethylthiazol-2-yl) 2,5-diphenyl tetrazolium bromide] (MTT) to a blue formazan crystal by mitochondrial succinate dehydrogenase activity of viable cells. This test is a good index of mitochondrial activity and thus of cell viability. After 24h incubation, the cells were washed with phosphate buﬀered saline (PBS) and 500 μl of MTT (Sigma #M-2128), 0.5 mg/ml in media was added to each well. After MTT addition (0.5mg/ml) the plates were covered and returned to the 37o C incubator for 2h, the optimal time for formazan product formation. (Following incubation, the supernatant was carefully removed from the wells, the formazan product was dissolved in 1 ml dimethyl sulfoxide (DMSO), and absorbance was measured at 570 nm in Bio Spec 1601, Shimadzu spectrometer. The OD570 of the DMSO solution in each well was considered to be proportional to the number of cells. The OD570 of the control (treatment without supplement) was considered 100%.

Gelatinase Zymography
Gelatinase zymography was performed in 10% Novex Pre-Cast SDS Polyacrylamide Gel (Invitrogen Corporation) in the presence of 0.1% gelatin under non-reducing conditions. Culture media (20 µl) were mixed with sample buffer and loaded for SDS-PAGE with tris glycine SDS buffer, as suggested by the manufacturer (Novex). Samples were not boiled before electrophoresis. Following electrophoresis, the gels were washed twice in 2.5% Triton X-100 for 30 minutes at room temperature to remove the SDS. The gels were then incubated at 37o C overnight in a substrate buffer containing 50mM Tris-HCl and 10mM CaCl2 at pH 8.0 and stained with 0.5% Coomassie Blue R250 in 50% methanol and 10% glacial acetic acid for 30 minutes and destained. Upon renaturation of the enzyme, the gelatinases digested the gelatin in the gel, producing clear bands against an intensely stained background. Protein standards were run concurrently and approximate molecular weights were determined by plotting the relative mobilities of known proteins.

Matrigel Invasion
Invasion studies were conducted using Matrigel (Becton Dickinson) inserts in 24 well plates. Suspended in medium, HT-1080 or A-2058 cells were supplemented with nutrients, as speciﬁed in the design of the experiment and seeded on the insert in the well, thus both the medium on the insert and in the well contained the same supplements. The plates with the inserts were then incubated in a culture incubator equilibrated with 95% air and 5% CO2 for 24 hours. After incubation, the media from the wells were withdrawn. The cells on the upper surface of the inserts were gently scrubbed away with cotton swabs. The cells that had penetrated the Matrigel membrane and migrated onto the lower surface of the Matrigel were stained with hematoxylin and eosin and visually counted under the microscope.

Morphology: H&E staining
Morphology of cells cultured for 24h in test concentrations of NM were evaluated by H&E staining and observed and photographed by microscopy.

Statistical Analysis
The results were expressed as means + SD, as indicated in the results, for the groups. Data was analyzed by independent sample “t” test using MedCalc Software (Markakerke, Belgium).

Morphology: H&E staining
H&E staining showed no morphological changes in ﬁbrosarcoma HT-1080 nor in melanoma A-2058 cells exposed to PB at lower concentrations and slight changes at higher concentrations, as shown in Figures 6 and 7.

Figure 7 – Effect of PB on morphology of melanoma A-2058 cells: H&E staining

The results from our in vitro study show that the combination of polyphenols in PB has significant anti-cancer effects against both fibrosarcoma HT-1080 and melanoma A-2059 cells. As such, PB demonstrated inhibitory effects on key parameters involved in cancer cells’ invasion and spread. The secretion of key ECM proteinases associated with cancer invasion and metastasis MMP-2 and MMP-9 was completely blocked by PB at 50 µg/ml in both cell lines and invasion of cells through Matrigel was 100% inhibited at 25 µg/ml. In addition, PB demonstrated increased cellular toxicity in both cell lines in a dose-dependent manner, with 80% inhibition of HT-1080 cells and A-2058 cells at 50-100 μg/ml and at 25-100 μg/ml, respectively.

Current treatment methods for aggressive metastatic cancers such as fibrosarcoma and melanoma are generally ineffective and toxic. Thus, a need exists for developing effective and non-toxic therapeutic agents for these cancers. Our studies demonstrated that the mixture of the non-toxic polyphenolic compounds in PB signiﬁcantly inhibited cancer-invasive parameters in fibrosarcoma HT-1080 and melanoma A-2058 cell lines, such as secretion of MMP-2 and -9, cell invasion, as well as cell proliferation. These results show that PB has a potential to become a natural, non-toxic therapeutic agent for fibrosarcoma and melanoma.

Category: Research In Cellular and Natural HealthMarch 3, 2017
Go to Top