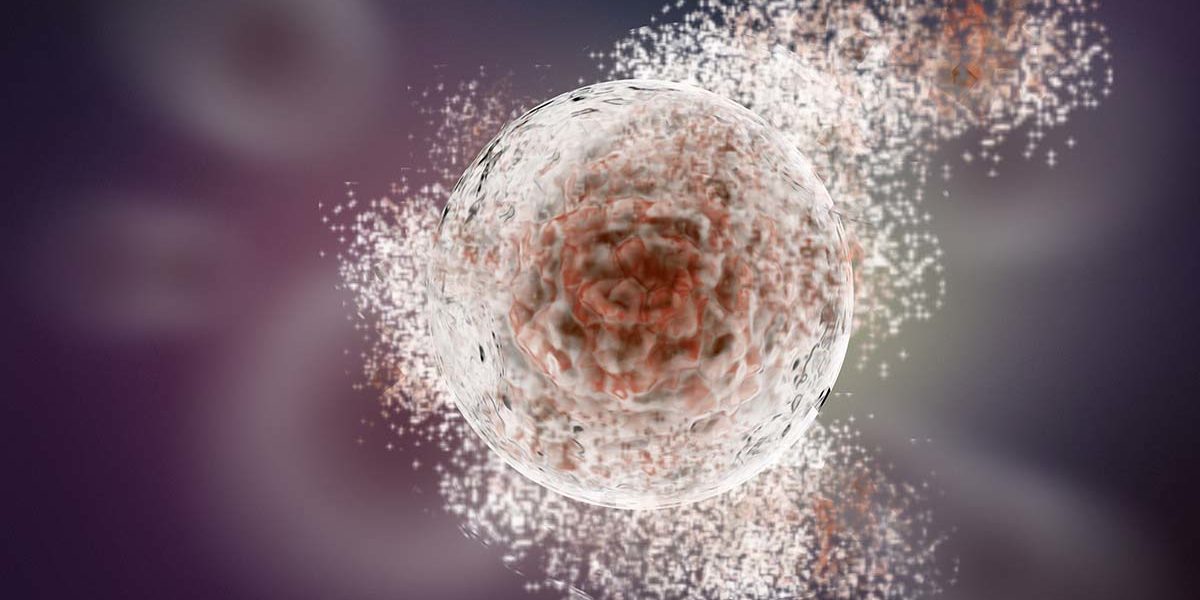 Chemotherapy and radiation are basic cancer therapies aimed at reducing tumor burden. These toxic agents destroy both malignant and normal cells thereby increasing the population of dying cells and/or tumor debris and causing other changes in the tumor microenvironment. These dead cells can act as a source of stimulants on surviving tumor cells leading to recurrence of tumors, thereby reducing survival rates. We investigated the effects of docetaxel-induced debris of 4T1 cells—a murine breast cancer line—on breast tumor growth in female mice. Female athymic mice were divided into three groups. Group 1 was inoculated with 4T1 cancer cells, Group 2 with 4T1 cells mixed with 4T1 cell debris, and Group 3 with 4T1 cell debris alone. All mice were fed a regular chow diet. After four weeks, the mice were sacrificed, their tumors excised, weighed and processed for histology and immunohistochemistry, including cell proliferation, angiogenesis and inflammatory markers. Tumor weight and tumor burden were significantly higher in Group 2 mice compared to Group 1 (by 40% and 44%, respectively), while Group 3 mice developed no tumors. Although the basic tumor histology for Groups 1 and 2 were similar, there were significant differences in the expression of inflammatory and cell growth parameters between these groups. As such, tumors developed in mice injected with 4T1 cells together with cell debris (Group 2) had more intense staining pattern for TNF-alpha, Il-6, iNOS, KI67, VEGF, MMP2, and MMP9, compared to the Group 1 mice (injected with cancer cells only). Our results confirm that breast cancer cells damaged by the chemotherapy agent can accelerate tumor growth, accompanied by higher expression of pro-inflammatory cytokines and the MMPs which are associated with extracellular matrix damage, angiogenesis and other tumor-promoting events. These studies demand a new and critical look into chemotherapy and radiation in cancer treatment and managing tumor growth.

Key therapeutic approaches in most cancer types—chemotherapy and radiation—aim at killing tumor cells, thereby reducing the tumor mass and tumor burden. However, the resulting accumulation of dead and dying cells in a tumor causes changes in tumor microenvironment affecting cancer progression. An intriguing clinical observation by Revesz in 1956 that tumor cells killed by X-ray stimulated growth of admixed viable cells unfortunately did not attract substantial research interest that would lead to unraveling molecular mechanisms involved in this phenomenon, until many years later.1 Understanding these aspects is necessary to the design of chemotherapeutic and radiation therapeutic modalities.

Some recent studies on the “Revesz phenomenon” identified cell debris generated by radiation and/or chemotherapy as tumor-promoting agents in colon and some other cancers.2,5 A study following in this direction also showed that the 5FU-generated colon cells debris can promote tumor growth and recurrence of cancer by affecting expression of osteopontin, as well as caspase-3-induced pro-angiogenic factors.2,3 A 2019 study published by Keklikoglou et al. confirms pro-metastatic effects of cytotoxic drugs broadly used in pre-operative (neoadjuvant) breast cancer therapy, such as taxanes and anthracyclines.4

We further investigated possible metabolic effects associated with toxicity of chemotherapy by studying breast tumor growth in female athymic nude mice injected with murine breast cancer cell 4T1 debris generated by the chemotherapeutic agent docetaxel compared to 4T1 cancer cells alone. The results of our study indicate that docetaxel-generated 4T1 cell debris accelerated the growth of breast cancer tumors in mice. The stimulation of tumor growth was associated with an increase of inflammatory cytokines TNF-alfa, IL-6, and iNOS, and other factors associated with tumor growth such as proangiogenic VEGF, and ECM-degrading enzymes involved in cancer cells invasion and metastasis (MMP-2 and MMP-9). The cell debris themselves were not effective in initiating tumor growth in mice during the time of the study.

Animals
Five/Six-week-old female athymic nude mice were purchased from Simonsen Laboratory (Gilroy, CA, USA). On arrival they were maintained in micro isolator cages under pathogen-free conditions on a 12hr light/12hr dark schedule for one week. All procedures were carried out according to humane and customary care. We followed the protocols approved by the Internal Institutional Animal Safety Committee. All the animals had free access to unlimited amount of regular Purina chow diet and water.

Culturing of 4T1 cells
4T1 breast cancer cells were cultured in T-175 flasks in complete media. At near confluence the cells were trypsinized, centrifuged at 4oC at 1500 rpm for 10 minutes. They were washed twice with sterile PBS. The pellet was suspended in PBS and counted.

Induction of 4T1 cell debris by Docetaxel
4T1 cells were cultured in T-175 flasks in complete media. At near confluence, the cells were treated with 50 mcg/ml docetaxel in complete media for 72 hrs at 37oC in a tissue culture incubator equilibrated with 95% air and 5% CO2. The dead floating cells were carefully collected and centrifuged at 1500 rpm for 10 minutes at 4oC. The supernatant was then carefully aspirated, the cells were counted and checked with trypan blue for any live cell contamination, washed twice with 10 ml sterile PBS and the debris—dead cells monitored as trypan blue positive cells—were suspended in PBS.

Dimensions (length and width) of the tumors were measured using a digital caliper and the tumor burden was calculated using the formula: length x width.

Histology & Immunohistochemistry
Tumor tissue samples were fixed in 10% buffered formalin and sent to IDEXX Reference Laboratories for processing, blocking, sectioning and staining with hematoxylin and eosin (H&E). Tumor morphology was evaluated using a standard light microscope. The staining for inflammatory, cancer and ECM markers were carried out by Histotox Lab Inc. (Boulder, CO).

Body weight
Figure 1 shows changes in the body weight of mice in 3 experimental groups. The mean body weight of the mice increased at the end of the study and it did not significantly differ between the control and 2 test groups.

Tumor histopathology
The results presented on Figs 4A and 4B show that H&E staining images of tumors in both groups were similar. Other histology evaluation showed that in both animal groups there was an irregularly round subcutaneous tumor necrosis involving about 60% of the tumor mass. In tumors developed in mice in Group 1 the neoplasm was composed of sheaths of irregular round to spindle-shaped cells with round to oval-shaped nuclei and a poorly defined cytoplasmic border, with mitotic figures ranging 1-3 per high power field. In Group 2 the neoplastic cells were somewhat larger than Group 1 with mitotic figures ranging from 1-4 per high power field.

The tumors in Group 2 (B) had similar intense staining pattern for collagen I and collagen IV internally as presented in Figure 5 and Figure 6, respectively. The fibrous capsule around the tumor appeared as having more irregular distribution of collagen IV in Group 2, compared to Group 1 (A).

Tumor immunohistochemistry
As shown in Figures 7A and 7B the cell proliferation marker Ki67 had higher intensity and frequency of staining in tumors originating from Group 2 mice compared to Group 1.

Among the inflammatory parameters that have been associated with tumor growth and expansion we observed that tumors developed in Group 2 mice had higher expression of cancer-promoting cytokines TNFalpha (Fig 8A and 8B) compared to tumors developed in Group 2 mice. A similar pattern was observed in expression of another pro-inflammatory cytokine, Il-6 (Figures 9A & 9B). It was higher in Group 2 tumors compared to tumors in Group 1.

The expression of iNOS—calcium-independent inducible isoform of Nitric Oxide (NO) shown to be expressed in many tumors—was higher in tumors derived from Group 2 mice compared to Group 1 tumors (Figures 10A and 10B).

The results in Figure 11 present immunostaining results of representative tumors for VEGF (A), MMP-2 (B) and MMP-9 (C), the factors associated with promotion of angiogenesis, tumor growth and metastatic potential. The results show that tumors developed in Group 2 mice have significantly more intense staining pattern for VEGF, MMP2 and MMP9 as compared to Group 1.

Comprehensive understanding of the effects of chemotherapeutic agents and radiation is critical in designing effective therapeutic methodologies based on these approaches and assess realistic prognosis of the course of a disease. In our study we examined metabolic impacts of chemotherapy-damaged cancer cells on breast cancer development in vivo.

Our study demonstrates that the cell debris of 4T1 murine breast cancer cell line generated by chemotherapeutic agent docetaxel and co-injected with breast cancer cells significantly promoted tumor growth. Compared to tumors developed in mice injected with cancer cells only, co-injection of tumor debris increased both tumor weight and burden by 40% and 44%, respectively. Interestingly, the cell debris alone did not trigger tumor growth during the 4-week observation time.

As anticipated, the tumor cell debris aggravated inflammatory response as indicated by elevated secretion of cytokines TNF-alpha and Il-6, thereby confirming earlier observation by Sulciner.5 Tumor necrosis factor-alpha (TNF-α) is an important multifunctional inflammatory cytokine with pleiotropic effects, involving among others regulation of apoptosis, affecting survival and immune responses.2,5 In addition, 4T1 tumor cells debris stimulated the expression of pro-inflammatory protein iNOS. Breast carcinoma cells, in addition to stromal cells, express iNOS and are capable of producing NO. Carcinomas with iNOS positive tumor and stromal cells have higher apoptotic indices and increased vascularization, suggesting that iNOS contributes to promotion of apoptosis and angiogenesis in breast carcinoma.6,7 High NO levels that produced cytotoxic effects in tumor cells are derived from macrophages, neutrophils, endothelial cells, and other cells.

Our study also shows increased staining for collagen I and IV both internally and in the fibrous tumor capsule in tumors developed by co-injection of cancer cells with docetaxel-induced debris (Group 2). Collagen IV is a principal component of epithelial basement membranes where it exists in sheet-like network. Immunochemistry staining for Collagen IV appeared more dispersed in tumors in Group 2 (co-injected with cell debris) than in Group 1 (cancer cells alone), which would suggest higher damage to extracellular proteins in tumors with a higher population of dead cells. Increased proteolytic activity in the debris-derived tumors is also indicated by higher MMPs activity, an indicator of higher metastatic potential.

The results of our study confirm earlier findings and show that conventional chemotherapy and targeted therapy can directly contribute to tumor progression and relapse as tumor cell debris stimulates the growth of surviving tumor cells. Chemotherapy-generated tumor cell debris can promote tumorigenesis by stimulating the release of pro-inflammatory cytokines and pro-angiogenic and pro-metastatic factors. These observations from our studies as well as others raise an important question regarding the real efficacy of chemotherapy and radiation as key modalities in cancer therapy. It calls for intensifying research efforts in how to find a balance between tumor cell death and tumorpromoting activity of dying tumor cells and their toxic debris. Understanding these two opposing effects is crucial and timely as millions of cancer patients undergo chemotherapy and radiation treatment every year.

Category: Research In Cellular and Natural HealthAugust 1, 2019
Go to Top