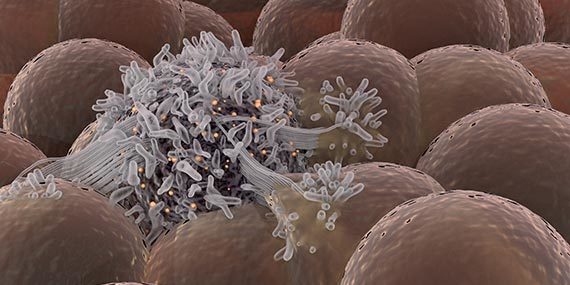 Chondrosarcoma, a malignant tumor of cartilaginous origin, is the most common of the adult primary bone cancers. Forty percent of primary bone cancers are chondrosarcoma. However as chondrosarcoma typically does not respond to radiation and chemotherapy, surgery is the main treatment option. Cancer mortality usually results from the local and distant metastasis. Based on the poor prognosis of chondrosarcoma, we investigated effects of a phytonutrient mixture (PB) containing quercetin, CruciferexTM, curcumin, resveratrol and green tea extract on several parameters associated with the development of this type of cancer.

The chondrosarcoma cells SW-1353 exposed to PB concentrations of 10, 25, 50, and 100 µg/ml were tested for cell proliferation/viability, morphology, matrix metalloproteinase (MMP) secretion, as well as their invasive and migration abilities. Cell proliferation was carried out by MTT assay, MMPs secretion by zymography, cell invasion by Matrigel assay, cellular migration by scratch test and morphology by H&amp;E staining. The PB inhibited cell proliferation in dose-dependent manner starting at 25µg/ml concentration. Zymography demonstrated two bands corresponding to MMP-2 and MMP-9 with enhanced MMP-9 expression upon PMA treatment. The PB inhibited expression of both MMPs in a dose-dependent manner in both PMA-stimulated and non-stimulated cells. Matrigel invasion was totally blocked at 25µg/ml. The H&E staining showed that the PB mixture at 25µg/ml to 100 µg/ml induced apoptotic changes in SW-1353 cells. Significant inhibition of important hallmarks of cancer progression by PB mixture suggests that this nutrient composition should be explored further as a therapeutic agent in chondrosarcoma.

It develops in the chondrocytes or cartilage cells, and mainly affects the legs, upper arms, scapula, ribs and pelvic bones. Although the exact etiology of chondrosarcoma is not known, it is postulated that individuals with certain genetic or chromosomal abnormalities are at increased risk. Grade and stage are the most important and independent prognostic factors for survival in chondrosarcoma. Cancer mortality usually results from tumor invasion and local or distant metastasis to vital organs. High-grade chondrosarcoma has much poorer prognosis with a calculated 38% of patients achieving 10-year survival 2Fiorenza F, Abudu A, Grimer RJ, et al. Risk factors for survival and local control in chondrosarcoma of bone. J Bone Joint Surg Br. 2002; 84(1): 93-9.. Recurrence is based on irregular tumour margins and lesions greater than 10 cm.

Surgery is generally the main treatment option for chondrosarcoma since chemotherapy or radiation therapies are not very effective and are rarely given in cases of extensive metastasis 3Gelderblom H, Hogendoorn PC, Dijkstra SD, et al. The clinical approach towards chondrosarcoma. Oncologist. 2008; 13(3): 320-329.. The high metastatic potential and poor outcomes associated with current therapies call for development of more effective and less toxic treatment alternatives.

The use of natural health products to prevent, inhibit and reverse carcinogenesis has been gaining in popularity since scientific evidence has demonstrated that the high consumption of fruits and vegetables is associated with a reduced risk of various cancers4Adlercreutz H. Western diet and Western diseases: some hormonal and biochemical mechanisms and associations. Scand J Clin Lab Invest. 1990 (Suppl); 201: 3-23.,5Miller AB. Diet and cancer. A review. Acta Oncol. 1990; 29: 87-95..

Different plant-derived polyphenols have been reported to provide a wide range of anti-carcinogenic properties, such as modulating cell proliferation, tumour growth, angiogenesis, metastasis, inﬂammation and inducing apoptosis. However, most studies have been conducted with individual polyphenols, many of which have poor bioavailability.

In our study, we used a combination of several polyphenols in order to achieve pleiotropic effects against chondrosarcoma cells and modulate bioavailability of these natural compounds through their interactions. The anti-cancer potential of a mixture of phytobiologicals (PB) containing quercetin, curcumin, green tea, cruciferex™, and resveratrol was tested in human chondrosarcoma cells SW-1353 by evaluating cell viability, MMPs secretion, cell invasion, migration and morphology.

Chondrosarcoma cells line SW-1353 came from American Type Culture Collection (ATCC, Rockville, MD), and grown in modified Dulbecco’s Eagle medium supplemented with 10% fetal bovine serum, 100 U/ ml penicillin and 100 µg/ml streptomycin (Gibco BRL, Long Island, NY) in 24-well tissue culture plates (Costar, Cambridge, MA). Cells were incubated in 1 ml of media at 37°C in a tissue culture incubator equilibrated with 95% air and 5% CO2. At near conﬂuence, the cells were treated with the PB dissolved in the media and tested in triplicate: 0, 10, 25, 50, 100 µg/ml. Cells were also treated with Phorbol Myristate Acetate (PMA) 100 ng/ ml to enhance MMP-9 expression. The plates were then returned to the incubator.

Composition of the phytonutrient mixture

Cell viability was evaluated by MTT assay, a colorimetric assay based on the ability of viable cells to reduce a soluble yellow tetrazolium salt [3-(4,5-dimethylthiazol-2-yl) 2,5-diphenyl tetrazolium bromide] (MTT) to a blue formazan crystal by mitochondrial succinate dehydrogenase activity of viable cells. This test is a good index of mitochondrial activity and thus of cell viability. After 24h incubation, the cells were washed with phosphate buffered saline (PBS) and 500 μl of MTT (Sigma #M-2128); 0.5 mg/ml in media was added to each well. After MTT addition (0.5mg/ml) the plates were covered and returned to the 37o C incubator for 2h, the optimal time for formazan product formation. Following incubation, the supernatant was carefully removed from the wells, the formazan product was dissolved in 1 ml dimethyl sulfoxide (DMSO), and absorbance was measured at 570 nm in Bio Spec 1601, Shimadzu spectrometer. The OD570 of the DMSO solution in each well was considered to be proportional to the number of cells. The OD570 of the control (treatment without supplement) was considered as 100%.

Gelatinase zymography was performed in 10% Novex Pre-Cast SDS Polyacrylamide Gel (Invitrogen Corporation) in the presence of 0.1% gelatin under non-reducing conditions. Culture media (20 µl) were mixed with sample buffer and loaded for SDS- PAGE with tris-glycine SDS buffer, as suggested by the manufacturer (Novex). Samples were not boiled before electrophoresis. Following electrophoresis, the gels were washed twice in 2.5% Triton X-100 for 30 minutes at room temperature to remove the SDS. The gels were then incubated at 37oC overnight in a substrate buffer containing 50mM Tris-HCl and 10mM CaCl2 at pH 8.0 and stained with 0.5% Coomassie Blue R250 in 50% methanol and 10% glacial acetic acid for 30 minutes and destained. Upon renaturation of the enzyme, the gelatinases digested the gelatin in the gel, producing clear bands against an intensely stained background. Protein standards were run concurrently and approximate molecular weights were determined by plotting the relative mobilities of known proteins.

Matrigel Invasion
Invasion studies were conducted using Matrigel (Becton Dickinson) inserts in 24 well plates. Suspended in medium the SW-1353 were supplemented with phytonutrients, as specified in the design of the experiment and seeded on the insert in the well. The plates with the inserts were then incubated in a culture incubator equilibrated with 95% air and 5% CO2 for 24 hours. After incubation, the media from the wells were withdrawn. The cells on the upper surface of the inserts were gently scrubbed away with cotton swabs. The cells that had penetrated the Matrigel membrane and migrated onto the lower surface of the Matrigel were stained with hematoxylin and eosin and visually counted under the microscope.

Scratch Test
A 2 mm-wide single uninterrupted scratch was made on the culture plates of chondrosarcoma SW-1353 cells grown to conﬂuence. Culture plates were washed with PBS and incubated with PB in tested medium at 0, 10, 25, 50 and 100 µg/ml in triplicate at each dose for 24 hours. Cells were washed, fixed and stained with H&E and photomicrographs were taken.

Morphology: H&E staining
Morphology of cells cultured for 24h in test concentrations of PB were evaluated by H&E staining and observed and photographed by microscopy.

Statistical Analysis
The results were expressed as means +/- SD, as indicated in the results, for the groups. Data was analyzed by independent sample “t” test using MedCalc Software (Markakerke, Belgium).

Cell proliferation/viability
PB significantly inhibited proliferation of chondrosarcoma SW-1353 cells in a dose-dependent manner with 16.8% inhibition at 10 μg/ml, 30% at 25 μg/ml, 53% at 50 and 66% at100 μg/ml concentration, as shown in Figure 1. 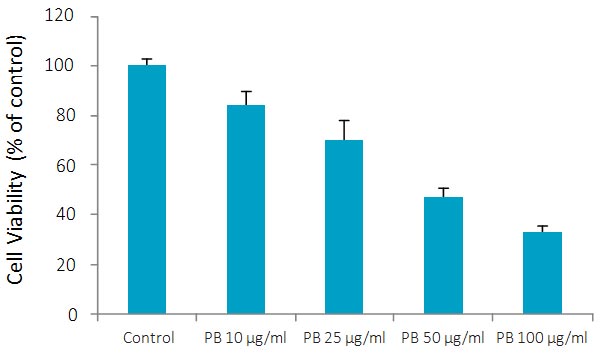 Gelatinase zymography
As shown in Figure 2, zymography indicated the presence of MMP-2 and MMP-9 in chondrosarcoma SW-1353 cells with strong induction of MMP-9 by the exposure of cells to PMA. MMP-2 and MMP-9 were inhibited by PB in a dose-dependent fashion in both PMA- stimulated and unstimulated SW-1353 cells. MMP-2 secretion was significantly blocked already at PB concentration of 25 µg/ml.

Matrigel invasion
PB inhibited chondrosarcoma SW-1353 cell invasion through Matrigel by 84% at the concentration of 10 μg/ml, with virtual 100% inhibition at 25 µg/ml, as shown in Figure 3.

Scratch Test
Figures 4A through 4G show that PB reduced cell migration of chondrosarcoma SW-1353 cells in a dose- response manner with a complete inhibition of cell migration at 50 µg/ml. 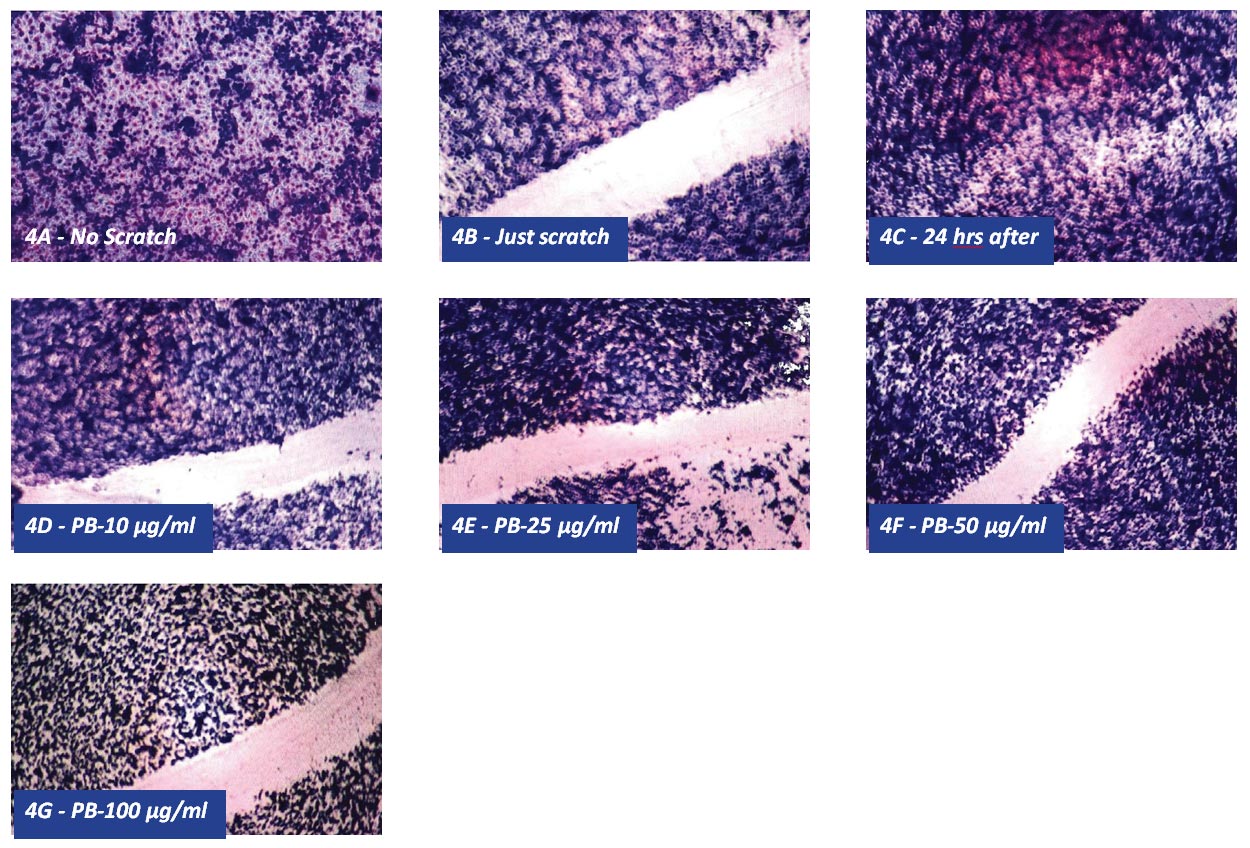 Morphology: H&E staining
H&E staining showed progressively increasing apoptotic changes in chondrosarcoma cells exposed to PB starting at 25 µg/ml up to 100 µg/ml as seen in Figures 5A through 5E.

Based on available treatment options, the prognosis of chondrosarcoma is still poor. Therefore, in the search for an effective approach we investigated the cellular efficacy of a specific mixture of different polyphenols (PB) for their anti-cancer pleiotropic effects using chondrosarcoma cell line SW-1353.

Our results demonstrate that PB is effective in inhibiting several key mechanisms of cancer, including cell proliferation (up to 70% inhibition at a concentration of 100 µg/ml) and triggering apoptosis. In addition, using gel scratch test and Matrigel invasion assays, we observed a dose-dependent decrease in the secretion of MMPs largely associated with cancer aggressiveness, such as MMP2 and MMP9, and inhibition of cell migration. These critical steps in cancer invasion and metastasis were blocked by the PB.

Our studies demonstrated that exposure of cells to PB results in a significant inhibition of MMP-2 and MMP-9 expression both in unstimulated and PMA-stimulated chondrosarcoma cells.

The anti-carcinogenic properties of CruciferexTM (a natural extract derived from cabbage, cauliﬂower, carrot and broccoli) include supporting detoxification and excretion of carcinogens, protection  against  oxidative  stress,  inhibition  of cancer cell proliferation and increase in apoptosis resulting in inhibition of tumour growth 10Keck AS and Finley JW. Cruciferous vegetables: cancer protective mechanisms of glucosinolate hydrolysis products and selenium. Integr Cancer Ther. 2004; 3: 5-12..

Induction of apoptosis by quercetin in cancer cells during different cell cycle stages without affecting normal cells has been documented in various cancers in vivo and in vitro 19Gibellini L, Pinti M, Nasi M, et al. Quercetin and cancer chemoprevention. Evid Based Complement Alternat Med. 2011; 2011: 591356; Epub 2011 Apr 14.. However,  many  of  these  polyphenol  fractions  show low bioavailability which could limit their anti-cancer efficacy in the whole body.

We applied a combination of these natural compounds in  order  to  increase  their  anti-cancer  cellular potential and modulate their bioavailability. As such, earlier  studies  showed  that  quercetin  can  increase the biological efficacy of green tea, curcumin, and resveratrol 20Niedzwiecki A, Roomi MW, Kalinovsky T, Rath M. Anticancer efficacy of polyphenols and their combinations. Nutrients. 2016; 8(9): 552., 21Kale A, Gawande S, Kotwal S, et al.. Studies on the effects of oral administration of nutrient mixture quercetin and red onions on the bioavailability of epigallocatechin gallate from green tea extract. Phytother Res. 2010; 24(S1): S48-S55., 22Kujawski R, Baraniak J, Ozarowski M, et al. Basic studies on chemopreventive properties of quercetin and curcumin and other plant-origin compounds in ovarian cancer cells – A mini-review. Altern Integr Med. 2017; 6: 238..

In addition their synergistic and additive effects could allow for expanding anti-cancer mechanisms and as such increase overall efficacy against cancer 23Gawande S, Kale A, Kotwal S. Effect of nutrient mixture and black grapes on the pharmacokinetics of orally administered (-)epigallocatechin-3-gallate from green tea extract: a human study. Phytother Res. 2008; 22(6): 802-808..

Our studies demonstrated that a mixture of specific natural phytobiological components (PB) could  significantly inhibit key cancer mechanisms in chondrosarcoma cells, such as their invasive potential, cell proliferation, secretion of MMP-2 and -9, in addition to pro-apoptotic effects. These findings suggest that PB should be investigated further as an effective and safe prevention measure and treatment against chondrosarcoma.

Category: Research In Cellular and Natural HealthOctober 19, 2017
Go to Top